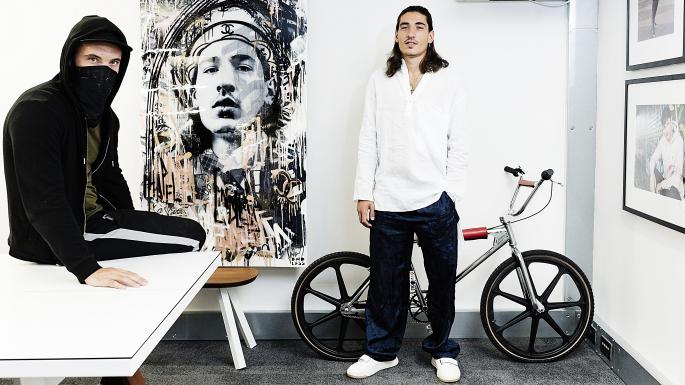 The 23-year-old Bellerín has a keen interest in art and fashion, appearing at London Fashion Week and being given a painting of himself by the London artist Endless. Find out more about the man in the mask at the bottom of the storyKI PRICE/GETTY IMAGES

Brexit, Catalonia, the environment, family, love, tactics, Barcelona, Wenger, Emery, succession, online abuse, racism and homophobia all bubble up during three hours with the remarkable Héctor Bellerín. Our first chat was at his home in London over the summer, the second at a restaurant in Marylebone. I’m not sure I have had a more engaging conversation with a sportsman.

“I was invited to the Oxford Union over the summer to do a question and answer with students and I loved it,” he says. “When you do a football interview it is very easy to stick to a formula: ‘We played really well’; ‘Winning is the most important thing’; ‘The three points are the key.’

“But the questions from students were wider. About Brexit, coping with pressure and Catalonia. It was great to talk about things beyond the game. Footballers sometimes worry about talking about things like that, in case it is controversial, but I think you should just be yourself.”

Bellerín has become well known not just for his defending and lightning pace but also for his distinctive presence in our national game. He posts photos of colourful outfits on social media. He talks openly about a love of fashion. He grows his hair. These facets of his persona ought to be welcomed. They bring character and flamboyance to a sometimes-monochrome game. Instead, at least among a minority in football, they are condemned.

He hands me his mobile phone to show a stream of invective under a recent photo of him wearing a white linen top. It is nasty stuff, much of it homophobic. “Some of it can get very abusive,” he says. “Most of the abuse is online, but you hear it in the stadium too. People have called me ‘lesbian’ for growing my hair. There are other kinds of homophobic insults. I have learnt to grow a thick skin but it can affect you. Every now and again, you get a bit of self-doubt.”

When Bellerín attended London Fashion Week last year, wearing matching gold silk top and trousers, Gucci slippers and a stencilled black coat, some organisations reacted with consternation. The False 9, a football website, reported that The Sportsman had tweeted, “Get him in the bin, shocking that”, while the site Talking Baws wrote, “His latest outing saw him arrive in WOMEN’S pyjamas” (their emphasis). Another tweeted, “She’s lost the f***ing plot”.

“The problem is that people have an idea of what a footballer should look like, how they should behave, what they should talk about,” Bellerín says. “You act a little differently and you become a target. There is pressure to conform. This is very dangerous. In life, you should be allowed to express yourself. People are happier like this.”

I ask if social media is more trouble than it is worth. “It can be a blessing and a curse,” he says. “When I first came into the ranks at Arsenal, the expectations were very low so people were often impressed when I played well. But then, when I played badly, the stick got crazy. The worst was a year and a half ago. A lot of people say nice things but it is natural to focus on the bad. For a while, I deleted the apps. Later, I decided to go back on. Twitter is a great source of information. Every day I am learning to deal with abuse in a better way.”

The 23-year-old arrived in London in 2011 after spending eight years at Barcelona’s famed youth academy, La Masia. He travelled 60km from his modest home in Calella, went to school in the morning, trained in the afternoon and then travelled back home, arriving around 11pm. It was gruelling but his work ethic never dimmed. He was spotted by Arsenal at 16 and moved to live in Enfield.

“I was in digs with Donna and John, a lovely family. I am still in touch with them,” he says. “I shared a room on the top floor with three other players, and we got the bus to training each morning. It was quite tough but I enjoyed it. I spent my career as a winger but they asked me to try as a full back. I learnt a huge amount from Steve Bould about positioning and tactics. He is a great coach.”

Bellerín has played 128 Premier League matches for Arsenal. Critics suggest that he has not lived up to his early potential but his track record is impressive. He has started all four Premier League matches this season, contributing an assist in the 3-1 victory over West Ham United and a series of probing runs against Cardiff City last Saturday. His pace is electric. In 2014, he beat the club’s 40-metre sprint record set by Theo Walcott. The right back has proved a strong attacking threat for Arsenal this season, providing an assist in the win against West Ham last monthMICHAEL REGAN/GETTY IMAGES

I ask about the transition from Arsène Wenger to Unai Emery. “It feels like a new club,” he says. “We have so many new staff. It’s a shame for those who have gone, and I am grateful to them all. Some had been at the club for many years. But you can understand why a new person would like to put their own stamp on the club.

“I am impressed with Emery. We lost our first two games but we were very close both times. After the match, the players could feel that things were coming together. With Arsène, he wanted us to play in the same way regardless of the opponents. The idea was that we could play in our way and beat anyone. But Emery is very focused on preparing a plan for our next opponents, whoever they may be. It is very detailed and very professional. The next few months are going to be very exciting for all of us. We will reach a higher level.”

We return to the subculture of football, and I wonder about other types of prejudice in the game. Bellerín argues that the authorities underplay the significance of racism. “Rhian Brewster [of Liverpool] is a young player who gave a brilliant interview about the abuse he has suffered,” he says. “For me, the likes of Fifa have to be tougher. They don’t do enough. Football should bring people together. The problems shouldn’t be hidden away.”

I wonder why there are no openly gay men in such a cosmopolitan game. “It is impossible that anybody could be openly gay in football,” he says. “Some fans are not ready. When it happened in rugby with the Welsh player [Gareth Thomas], people respected the situation. The fans respected his decision. In football, the culture is different. It can be very personal, very nasty, particularly for players from the opposition team.” 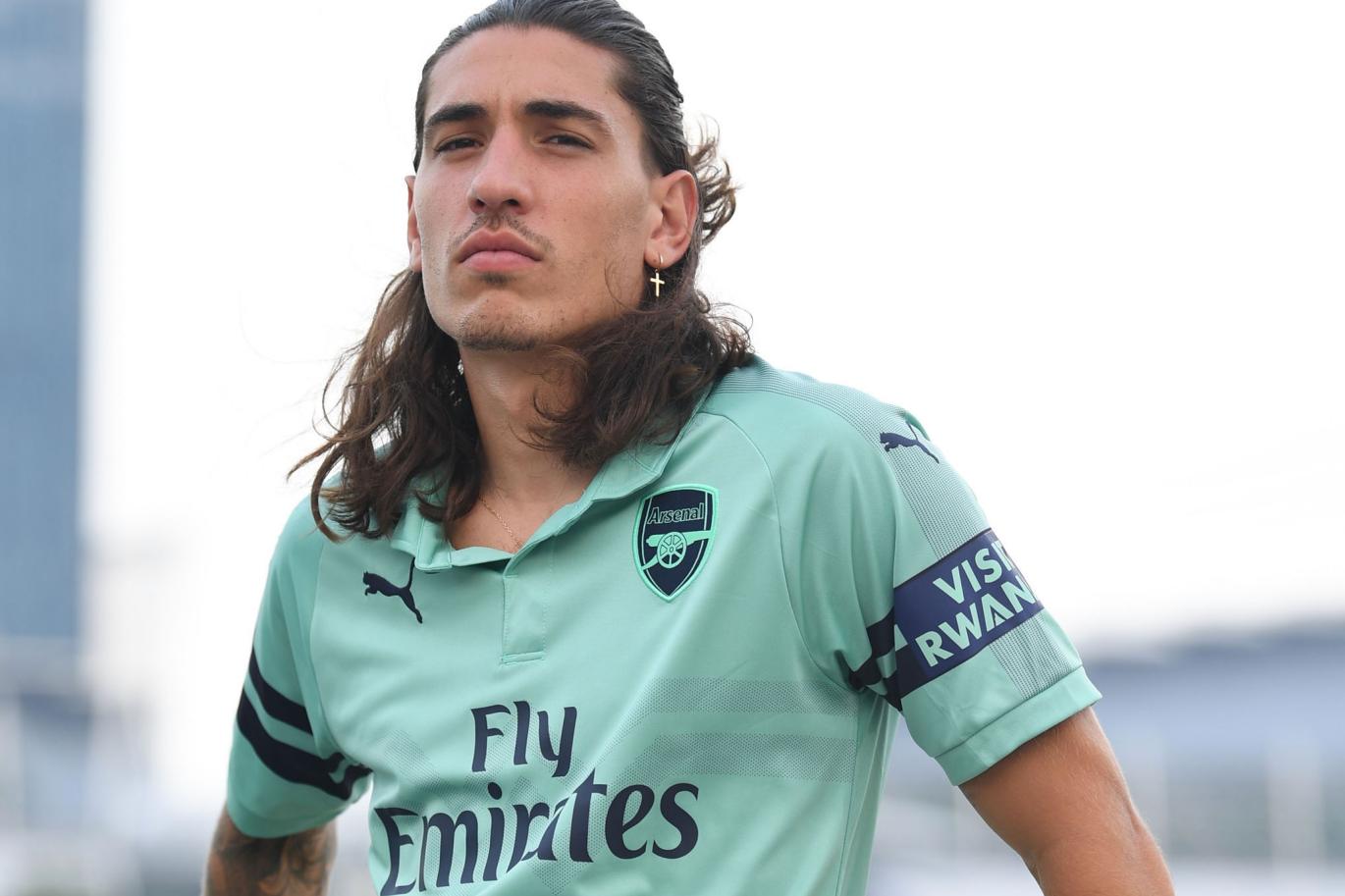 Bellerín is comfortable discuss politics and fashion, something most players might shy away fromSTUART MACFARLANE/ARSENAL FC VIA GETTY IMAGES

Bellerín is not just intelligent, but empathetic. Unlike many in the spotlight, he takes the trouble to ask about my life and family. He is unafraid to express strong opinions.

He is against Catalan independence, arguing that it would undermine the strength of his home country. “I want Spain to be Spain,” he says. “This is not the time to be separating countries.” He is against Brexit and speaks intelligently about the environment, particularly his decision to campaign for cutting down on single-use plastics. “This is a passion,” he says. “If you have a platform, it would be irresponsible not to use it.”

On football, he is an advocate of a winter break — “People don’t realise how easy it is to get injured when you are putting your body under strain, match after match” — and argues that VAR can be a force for good if the anomalies can be sorted out. “VAR can remove injustices, but decisions need to be taken faster,” he says. “Football is a game of speed and drama.”

He talks in a stimulating way about player development and tactics. You could easily see him going into coaching when his playing career ends. But we finish where we started, on football’s culture wars. The game has long been characterised by a narrow conception of masculinity. Players are supposed to be alpha, rugged, tough. When David Beckham admitted to using moisturiser, and posed on the front cover of a gay magazine in 2002, he was targeted by fans and publications. Progressives like to think that the culture has changed but Bellerín’s testimony suggests there is a long way to go.

“People should be able to express themselves without feeling threatened,” he says. “That is true in football, but also in life. I don’t know why people are so angry when someone wants to be a bit different. So long as nobody is being harmed, what is the problem?”

Who’s the man in the mask?
Endless is a London-based artist who, according to his website, produces “provocative and radical creations” that “tell a story of our world that is bold and intense”. He began as a street artist using the “walls of our nation’s capital as his canvas” but is now seen in galleries and on the walls of celebrities.